Totò, the Prince of laughter

Nowadays, very few Italian actors are able to emerge on the world cinema scene. Until a few decades ago it was different, but we talk about the age of the young Cinecittà, where it was not unusual to meet world-famous directors who set their stories which became known all over the world in those studios!

At that crossroads of cultural exchanges that was Cinecittà, it was easy for a talented actor to become known throughout the world, thanks also to the fact that Italian films were more often exported around the world than now.

Among those faces which became known in the world, there is definitely Totò, a charismatic personality who to define only "actor" is an understatement. Those who know him knew he was a prince, but in reality his noble titles were really extensive. However, this is not what strikes us in Totò.

His early work as an actor was varying and the actor had several problems before emerging. In fact, initially Totò had to perform in small shows, often badly paid. He could hardly live from his income, let alone gaining any notoriety from these performances. Unfortunately the world of arts is like this: before reaching a certain level, you must sweat and struggle waiting for the first right opportunity. And after his initial struggles, Totò saw his opportunity arriving in 1927. In that year he entered his first theater company, which allowed him to work satisfactorily as an actor.

Starting from this point, the rise of Totò as an actor was unstoppable and a few years later he acted in his first movie. In 1937, after several proposals, he interpreted his first movie. Soon he became an icon of Italian comic cinema, although he was not always appreciated by critics. But as we all know: often the critics fail to grasp the taste of the people and this was also the case of Totò, who was much loved by his audience.

However, Totò was much more than his movies. In addition to theater, cinema and television, he also expressed his artistic talent through music and poetry.

His song "malafemmena" became, and still is, well known. Especially in Italy. Over the years this popular song was interpreted and covered by a variety of artists. But next to that, he wrote hundreds of songs and poems, and not all of them had a comic and playful style, due to to his personal life which was anything but simple, and, at times, marred by sentimental tragedies which marked him as a man. Such as: the suicide of Liliana Castagnola, a woman he loved deeply, often ending in jealousy, and by whose name he baptized his daughter, Liliana De Curtis.

Being a man of versatile genius and great generosity, Totò crossed the decades giving Italian art a great creative impulse and leaving his footmark, which few other Italian actors and artists of that period, even those more known, managed to give.

Without a doubt, his love was theater, but he never spared himself, exploring all sorts of artistic expression an actor of that time could benefit. He had a life of an indefatigable stage worker and this, over the years, was often acknowledged to him, despite fluctuating and sometimes adverse judgments of critics. 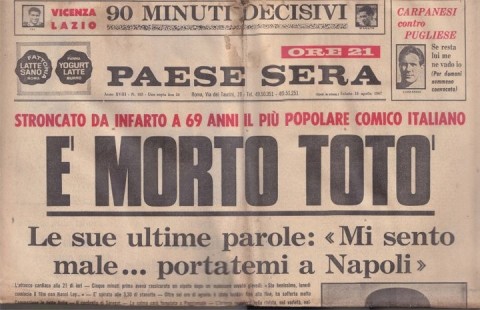 In April 1967, a few hours before going to bed, Totò was hit by a massive heart attack and, after suffering for quite a while, he finally died, surrounded by all the people he loved.

Even in death the extravagance did not abandon the actor. Although he wanted a simple funeral ceremony, he had not one but three. The first funeral took place in Rome, the city where he died, after two days of funeral wake. After the first funeral, Totò's body was transported to Naples, where the second funeral took place. This one was attended by more than 200,000 people. The third was held in Naples, in the Rione Sanità. Several people took part in this one, paying homage to a completely empty coffin.

And so, even one of the greatest comedians of twentieth-century Italy had passed to rest after the toils and pains of life. But the memory of Totò will live forever, thanks to his art, his movies, his shows, his songs and his poems which people, even in this globalized world in which it seems that everyone looks at the same movies and read the same books, appreciate and watch.

The figure of Totò will remain forever in the hearts of the people for its comic verve and its simplicity on the screen. Thanks to his intellect and his artistic skills, he put his mark on an indelible piece of Italian popular culture during the first half of the twentieth century. A piece which must be known to understand at least part of the characteristics of the Italian people.

By accepting you will be accessing a service provided by a third-party external to https://www.italiangenealogy.com/