San Gennaro between miracles and reality All the Italian towns are voted to a Saint and one of these is San Gennaro, well-known for his miracle.

Who was San Gennaro?

San Gennaro was born between Naples and Benevento in 272 AD (the exact place of his birth is not clear) and was a bishop and martyr of the Christian church.

His story tells one day Gennaro visited the Deacon Sossio who was in prison. The Deacon was previously arrested by the governor of Campania during the persecution of Christians. Starting from that moment, for Gennaro began a journey that led him to his martyrdom. A path, however, shrouded in mystery.

At first, he was convicted to be torn to pieces alive by the lions, but on the day of the execution, Gennaro made them kneel in front of the condemned after a blessing. On account of this miracle, the governor commanded that the head of Gennaro and the others was cut off. On september 305, he and the other convicts were taken to the Forum Vulcani and beheaded.

At first Gennaro's body was brought into the Agro Marciano and then, some time later, into the Catacombs of San Gennaro. Years Later, on the place of execution, a sanctuary was built in memory of martyrdom.
According to tradition, the events during the day of the execution were many.

It seems Gennaro promised a beggar the handkerchief with which the saint was blindfolded before beheaded to keep it as a relic. It's also said that during his beheading, the Saint arranged the aforementioned handkerchief with a finger but, at that moment, the executioner vibrated his mortal strike, cutting off even his finger.

Finally it's said that a woman, Eusebia, collected some ampulline of the blood of the saint, which soon became his symbol. 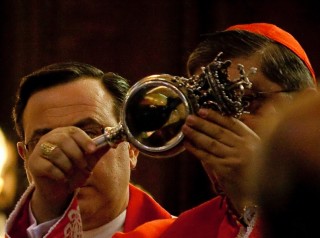 The miracle of the Blood of San Gennaro.
As we all know, blood coagulates after coming out of the veins. Well, this doesn't seem to happen with the blood of San Gennaro who, instead, tends to liquefy.
This miracle occurred for the first time when the saint's remains were transferred to the Agro Marciano. The blood collected by Eusebia, placed in front of the head, became liquid again.

Since then, this miracle was repeated many other times and was documented only from 1389.

Eusebia filled three ampoules with the blood of the Saint. Two are preserved in the Cappella Del Tesoro San Gennaro and the third is preserved in the Complesso Monumentale Vincenziano, also in Naples, in the Borgo delle Vergini.

The two ampoules at the Cappella Del Tesoro are shown to the public, during a solemn ceremony, three times a year (the Saturday before the first Sunday of May, September 19th and December 16th): if the blood returns to a liquid state, for the city of Naples there will be positive events, otherwise there will be dramatic events.

The position of the Church and of science

Science and Church have taken their respective positions about this miracle.
For the Church the fact is inexplicable and prodigious, but it's not an obligation for the believer to place their faith in it. To be clear, for the ecclesiastical authorities the fact is prodigious, but to believe in it depends on the religious sensitivity of each believer.

Over the centuries, however, science has tried several times to replicate the miracle in question, finding alternatives and scientifically valid explanations about it but, at the moment, no scientist has been allowed to analyze the liquid of ampoules, fueling the mystery about it.

Regardless of these positions, the miracle in question is very felt by the people of Naples devoted to the Saint and many people go to pray the blood of San Gennaro so that the sun of optimism may shine on the city (and on their own lives). Of course, it cannot be denied that some doubts about the miracle come when the blood melts and some inconvenience occurs in one's life, but the fascination of these prodigious events lies in the devotion they manage to gather in people and in the way of improving mind of the believer.