As a nation state, Italy has emerged only in 1871. Until then the country was politically divided into a large number of independant cities, provinces and islands. The currently available evidences point out to a dominant Etruscan, Greek and Roman cultural influence on today's Italians.
Post Reply
2 posts • Page 1 of 1

Hello & good evening folks , iam new here to this forum , bought here in my search for info that iam reasearching on a Italian POW one Corpral Modesto Barnini of the 1st Engineers Regt , captured on 12/5/43 in the town of Korba ,Tunisia , Cap Bon by the Scottish Black Watch regt !
Modesto was 39/40yrs old at the time of his capture he came from Savigliano Cuneo & was a Plumber by trade. Then after his POW processing he was sent to a Work camp in Tunisia for a few months until in 1944 he was shipped to Britain & then to darkest rural Mid Wales infact to my own town of Builth Wells to Italian POW work coy camp 573 were he remained for about a year working on local farms etc until he was transferred to a different camp over the boarder in England & thats were the trail goes cold !!
Well by now you must be wondering how i have all this info ?...well i have been lucky in my collecting interest in Italian militaria/history that a collector friend contacted me after finding some POW index cards & to my amazment one set of documents those of Cpl Barnini's wartime records including a photos of him etc , showed he was a POW in my town during WW2 ...rare stuff indeed..but i would like to find out if he got back to Italy ok & what became of him ?....Semovente 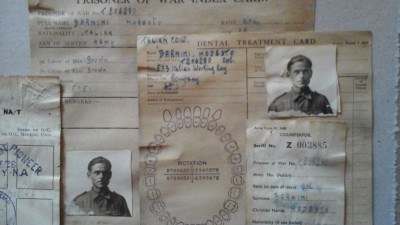 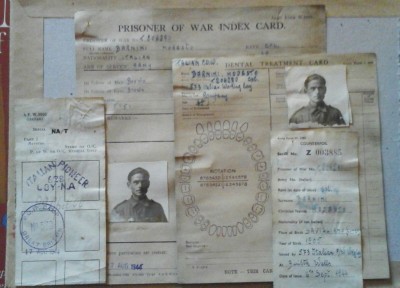 What fantastic finds!!! This is so interesting.

What I would suggest you do is write to the Red Cross and ask for a copy of Modesto's POW records, which will list all the POW Camps he was detained in. (They were going to be putting them online but I'm not sure if they have done this yet. Someone else might know.) Included with the POW records there may also possibly be an ID Sheet which would list his parents names, his place and date of birth, occupation, address etc.

Re wanting to know whether or not he returned to Italia, you could request a copy of his Military Record from the State Archives in Cuneo. It should include his discharge information on it (and of course his military journey - but most probably not his pow journey, just his capture and release date maybe.) It is important to know his year of birth which looks like 1905? Someone here may help you with a letter and the correct address, if needed.

All the best, and let us know how you get on.