An Italian novel for kids called "La Freccia Azzurra" (The Blue Arrow) says that all the children in the world wait for Christmas Eve to get presents from Santa Clause, but Italian kids are the luckiest in the world because they get presents again on the 6th of January by the Befana.

Who is the Befana?

She's an old woman, looking like a witch, who flies on a broom in the night between the 5th and 6th of January. If the child has been good she will give candies and toys, but if he or she has been naughty, they will get coal. This particular Italian tradition was very important in the past and until the end of the Second World War Italian children only had the Befana bringing them gifts. Santa Clause was introduced later into the Italian Christmas Tradition. 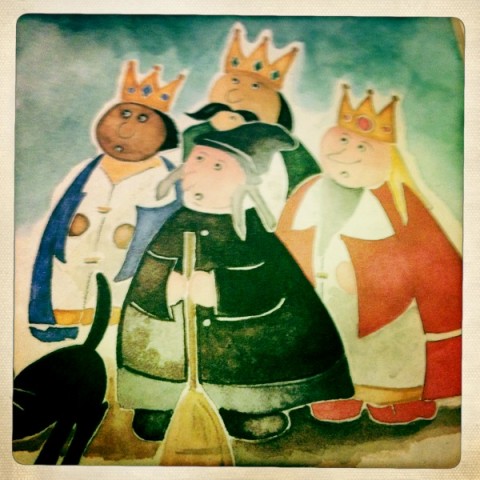 So where did this mysterious character came from?

The tradition of presents on the 6th of January is also known in other countries: the Three Wise Men came to Bethlehem to bring royal gifts to Jesus, recognizing him as a King, and that day for Christian Religion is called Epiphany, which means manifestation. The Three Kings represent the human being recognizing the revelation of God who made man.

It is the misspelling of "Epifania", the Italian word for Epiphany, that created the word "Befana". According to Christian legend there was an old woman who was sweeping her house when the Three Wise Men knocked at her door on their way to Bethlehem. She hosted them and gave them food and drinks. The day after they asked her if she wanted to go with them to find baby Jesus. Being busy she rejected the offer, but some day after she regretted it and started to wander around to find the child. Not succeeding she decided to bring gifts to good children and coal to bad ones.

Behind the Christian legend there's even a more ancient tradition, which explains why this character is typically Italian. This tradition has to do with the Gods Strenua and Ianus in Ancient Rome.

At the end of the year Roman celebrated Strenia or Strenua as Goddess of Prosperity and New Year by exchanging gifts. In Italian and in many dialects of Italian Regions still exists the word "strenna" meaning "Christmas gift". According to this explanation the Befana tradition is a clear example of how Christianity and Paganism merged together and formed a new tradition.

The end of the Year, the Solstice were always something sacred for ancient cultures. Celebrating wishes and hopes always included the exchange of gifts. The Befana with her scary appearance of an old witch stands symbol for that: the old year that leaves gifts to the new one, the older generations making room for the new ones, the children.

Still on Januari 5th, kids in Italy hang their socks out, waiting for that mysterious and scary old woman that will fill them full of candies, sweets and if they were really good, with a toy they really want. At least, if they were good. Otherwise they will get nothing more than coals.