Having problems with the Italian language? Do you need help to translate or understand an old family document? There is always someone who can help you!
Post Reply
6 posts • Page 1 of 1

Hi, on the birth certificate of my GGF (Giovanni Giusto) there is a home address but I can't read it. It's in some frazione of Voghera, and looks like "Frazione D", but I could not find a frazione starting with D in Voghera. I also can't read any of the other stuff that's following "nella casa posta". Can anyone who's good at deciphering cursive help? His father's name was Giuseppe and mother Ermelinda. I see them mentioned in the other handwritten parts but wish I could read it in context. It looks like there's another name like Leovanni or similar following his father's name, but again it's hard to read and my Italian is very limited. Thanks in advance! 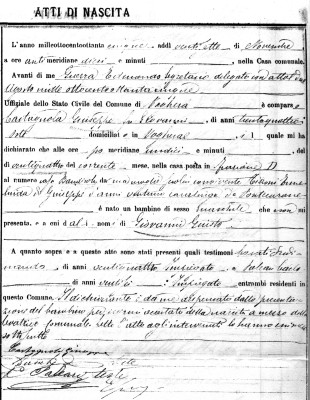 It's not the greatest copy of the birth record but I've done my best. Giuseppe's father's name looks like Elovanni, but maybe it is suppose to be Giovanni - Is this their first son? Generally the first son was named after the paternal grandfather. It does look like Frasione D - it looks like the surrounding little hamlets or sections of the town were named alphabetically in that time. You may be able to locate an old map somewhere to confirm this. Anyways it looks like there is now a Via Bandirola in the town, which you might like to research.

Birth registered on 27 November 1885 in the town of Voghera.

Father: Giuseppe Castagnola, son of the deceased Elovanni?, 34 yo, occupation?, living in Voghera, who reported that at 11 pm, on 24 November 1885, in the house in Frasione D, Casa Bandirola, from his wife, living with him, Ermelinda Tizzoni (Tissone), daughter of Giuseppe, 21 yo, casalinga (domestic), from Pontecurone, was born a baby boy who was not presented, and was given the name Giovanni Giusto.

Father: Giuseppe Castagnola, son of the deceased Giovanni, 34 yo, oste, living in Voghera, who reported that at 11 pm, on 24 November 1885, in the house in Frazione D, Casa Bandirola, from his wife, living with him, Ermelinda Tizzoni, daughter of Giuseppe, 21 yo, casalinga (domestic), from Pontecurone, was born a baby boy who was not presented, and was given the name Giovanni Giusto.

@mmogno
Thanks for checking the translation and making the corrections. So Giuseppe was an Innkeeper - Oste. Good catch.
I can see it clearly now.

Thanks so much! This helps a lot.
Top