As a nation state, Italy has emerged only in 1871. Until then the country was politically divided into a large number of independant cities, provinces and islands. The currently available evidences point out to a dominant Etruscan, Greek and Roman cultural influence on today's Italians.
Post Reply
14 posts • Page 1 of 1

I was researching information on Count Gerolamo Moroni.

He was Italian vice-consul in New Orleans (Louisiana) for the southern region, including Florida, circa 1908-1912. He married Eleanor Curran, from Louisiana, circa 1912, probably in Mississippi.

In 1913 Moroni was Italian vice-consul in Montreal, Quebec, for Canada. He is also known as Royal Italian Agent, or Consular Attaché. In 1914, in Montreal he was decorated by the King of Italy, with the Order Crown of Italy.

In 1923, Eleanor Curran (Countess Moroni) would file for divorce in Rhode Island. She would meet Montreal businessman and cigar manufacturer (Imperial Tobacco Company), multi-millionaire, Sir Mortimer Davis. She would marry him in 1924.

Around this time, Moroni would work for the United States Rubber Company, and the Colt company, and would move to the far east (Java). After this time he was never heard form again.
It seems he was a founding member of the Rotary of Milan, circa 1923. He is listed as G Moroni, Asbestos Company.

Circa 1931, Eleanor (Davis) would go on to marry Eric Loder.

The information seems to point that he was originally from Rome, but operated in Milan. He was born of a noble family which date back to Rome, 12th century, enobled circa 1513, by Charles the 5th. He was related to Pope Leo XIII (Pecci), through marriage. I believe his relative, probably a brother, Michele Moroni, married the niece of Pope Leo, Maria Pecci, circa 1887. Michele Moroni, was a lieutenant of the Papal Noble Guard.

Anyway, all this to say, if its possible to find any more information of Gerolamo Moroni's family tree, or activity in Italy. I have researched many US and Canadian newspapers, but after 1920's there is no information. Specifically, I was looking to find any photo of him or sketch, or portrait. I would assume its available, just difficult to find over here. He was supposedly of nobility, moved in high government, business,and social circles all around the world, as did his famous wife, Eleanor.

Any guidance or information would be greatly appreciated.
Top

The only specific information I found regarding Italy, which confirms my previous search is from Ancestry, his travel manifests, which include this one. I do not find any other information in Ancestry other than manifests.
I reversed the pages but he is line 15, 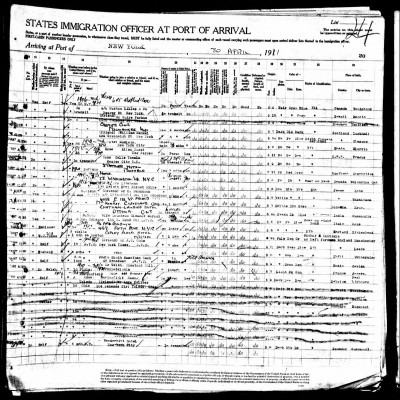 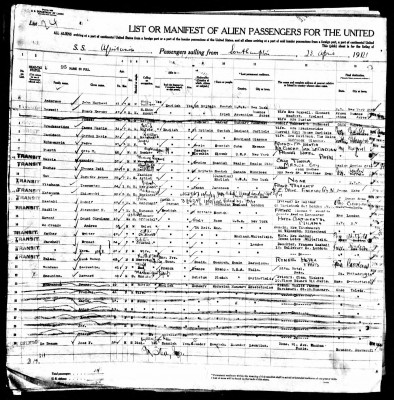 There is some kind of mention of them in a March 29, 1928 p. 3 newspaper clipping from The Marion Star from Ohio. You would have to sign up for a free 7 day trial subscription in order to view the info, unless someone else can access it for you.

I found the following reference as well

Thank you, both good ideas.
Most of the articles center on his wife, the Countess, including her photo, especially after the divorce.
There are hundreds of articles, but none provide many details about his background.

I found the following family tree, but im not sure how to interpret it properly

(sorry, the images are reversed, and I couldnt figure out how to reverse them) 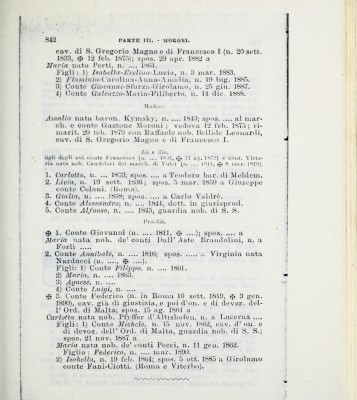 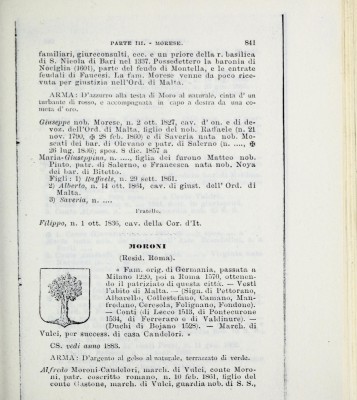 thank you
No, i had not seen those specific sites, I appreciate that. I do remember seeing on other sites some of those families referenced. They could be related, however its difficult to yet make the link between the Moroni of 20th century, to that of 16th century.

If i assume there is a link between him and Pope Leo XII (Pecci), (which might be incorrect since its only based on a news article form 1915), then the following might also be relevant. Based on my again, very ROUGH interpretation of Italian, it seems to mention Michele Moroni, as the nephew of the Pope, and his child Federico, but no mention of Gerolamo as being related. I believe this is papal announcement circa 1900.

Based on my research, it appears Gerolamo was born circa 1875. He was also wounded in the Africa campaign, as a long time officer or lieutenant of the Italian Army . Located this birth record in 1872 in Rome, for Girolamo Moroni, son of Conte Annibale Moroni and Signora Virginia Narducci. I do not know if this is your Gerolamo, but I thought I would post it.

#1403 in Vol. 3 Series B
Dated 17 July 1872 in Rome
Declaration by Signora Teresa Girolami, 46, who assisted with the birth.
She declared that the child was born on 13 July at the house at Via Monserrato, #29, third floor, Rione Regola [Regola was the 7th historical district of the city of Rome].
The male child was given the name GIROLAMO. He was the son of Conte Annibale Moroni, 56, landowner born in Rome; and of Signora Virginia Narducci [daughter of deceased Francesco] age 36, his wife.
The child was not presented for hygienic reasons.

Here is a link to a map of the rioni
https://en.wikipedia.org/wiki/File:Roma_rioni_mappa.png

EDIT TO ADD***
Prior to the birth of the above Girolamo in 1872, there was another child born to Conte Annibale Moroni who was given the name Girolamo. This child probably died and the name was given to the child born in 1872.

I realized that this was not the year of birth you had found in most records for Conte Girolamo Moroni, and so I looked further. I located another male child born to Conte Annibale Moroni in 1874 (the year you see most often in records for Girolamo), who was given the name Francesco. On this birth act is an annotation which appears to read that in 1890, Francesco Moroni was given the authority to be called Girolamo. I will look for THAT record.
Birth of Francesco with notation...
#1220 - bottom right
http://www.antenati.san.beniculturali.i ... 5.jpg.html

Here is the annotated record - #219 Parte II, Series A, of the register of births in 1890.
It adds a name...
Francesco Moroni (born 1874) became Girolamo Francesco Moroni... I believe this may be your Conte Girolamo Moroni...
http://www.antenati.san.beniculturali.i ... ewsIndex=0

Thank you both so much.

Good work, and I see the confusion is explained better now. I think you found him also, Tessa. Thats GREAT!

So this Moroni family (Annibale & Virginia) seems to relate to my Italian "Moroni tree" document which I posted yesterday .....and that document seems to show some sort of relation between, Giovanni, Annibale, and Federico. And Federico's son, Michele, is the man who married Maria Pecci, who was Pope Leo's niece ! So if I understand correctly, Michele and Francesco (Gerolamo) would be cousins....I guess

The name Francesco, (nor Gerolamo) does not appear in my tree document....I see Filippo, Agnes, Maria, and Luigi, I assume its just because the document is incomplete?
Top

In the act of birth (add a name) in 1890 for Girolamo Francesco Moroni, it identifies his father as Conte Annibale and Annibale's father as deceased Michele.

IF Annibale and Federico were brothers (both with father Michele) then Federico's son, Michele, who married Maria Pecci, would definitely be a cousin of Girolamo.

It does appear that the tree document MAY be incomplete.

Here is a picture of Count Moroni (though not too clear) as a Papal Delegate to Peru in 1924.
From Jamestown NY Evening Journal 1924.
He is the second from left - the picture is at the bottom of the page on the right.
http://www.fultonhistory.com/highlighte ... 46c#page=1

Another article which mentions the same papal party on a mission from Rome, and Count Moroni is described as a noble guard. So I believe this photo pertains to Count (MIchele) Moroni, (Gerolamo's cousin...). So we are very close

We know Gerolamo's wife, filed divorce on him, in Milan, in 1923. It is said in the US newspapers that they actually split in 1915, when he would have left Montreal....

I found the following Moroni Tree, Im interested in what it says, particularly the part about I believe it mentions King Charles V ? 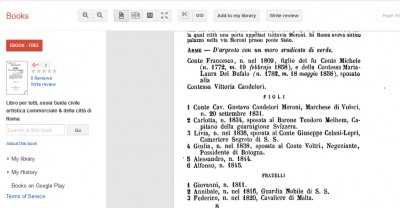 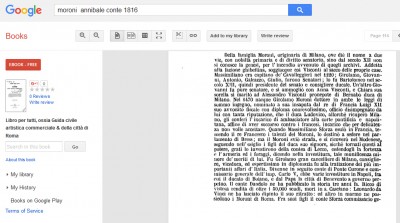 Would just like to confirm you are correct, marriage says

Girolamo's father is Annibale and his mother is Virginia Narducci
Age 37, b. Italy
his occupation shows "Financier"
One of the two witnesses seems to be Lani
They reside in NYC at the time of marriage (New Jersey)